This is a lightly edited version of my monthly newsletter. Sign up here

There is a common misconception that the US trade imbalance can be corrected with trade measures such as tariffs or exchange rates. Michael Pettis, who excels at using first principles to explain economics [1], disagrees, recently writing about why taxing capital inflows would be better than imposing tariffs in addressing the US trade imbalance.

Some might think that imposing tariffs on imported goods is a more effective way to reduce U.S. trade deficits than levying duties on imported capital, but that’s the wrong approach.

If the recent Senate bill had been proposed in the nineteenth century—when trade finance dominated international capital flows—the proposal to tax capital inflows wouldn’t have made much sense. But today, […] the global economy is overflowing with excess savings. The need to park these excess savings somewhere safe is what fuels global capital flows, in turn giving rise to trade imbalances.

Recall that the capital account (money) and the current account (trade) always balance [2]. If the US gets $100 inflow of capital, somewhere down the line $100 of current account outflows happen, increasing the trade deficit (US importing more than it exports). Pettis’ point is that the conventional focus on the trade account is misguided, since it is no longer the driving force, and is instead being driven by changes in the capital account. Even if you made big policy changes on the trade account, that still won’t be enough as long as capital is flowing into the US.

capital inflows force the U.S. economy to adjust either by increasing unemployment or, more likely, by setting off conditions that cause fiscal or household debt to grow. Put another way, the United States doesn’t absorb foreign capital because the country has a low savings rate—the country’s savings rate is low because it has to absorb so much foreign capital.

Recall that since a current account deficit is equal to a capital account surplus, the difference between your exports and imports (current account) is equal to the difference between your savings and investments (capital account). When you get capital inflows, that difference between savings and investment must increase. For the US, investment is already higher than savings, and that means either investment has to rise further, or savings has to decline. Pettis is arguing here that savings are more likely to decline than investment is to rise. Because the US is getting so much foreign capital, it has a low savings rate and trade deficit. Trying to fix the trade deficit via tariffs might even be counterproductive if it causes more capital to flow into the US.

This is why it is a mistake to think—as many do—that Americans need foreign capital to counter low domestic savings rates, or even that the U.S. current account deficit is driven in part by a burgeoning fiscal deficit.

If conventional thought concludes that the US needs to bring in more capital to help with savings or fiscal deficits, that would lead to even larger imbalances. Pettis concludes by discussing a few benefits a tax on capital inflows would have, including flexibility, stability, and efficiency.

I went to a tech conference recently, and it seems people have finally realised they should be copying Chinese app product features, rather than the other way around. We’re now in an age in which new product features are as likely, if not more so, to come from China compared to the rest of world. Superapps, live streaming gifting, TikTok are just a few examples. China Influencer Update higlighted some recent case studies on Chinese influencers:

Essentially longtail KOLs (Key Opinion Leaders), KOCs (Key Opinion Consumers) are ordinary internet users who often leave reviews or share their opinions about products. […] with KOCs feeling more peer to peer while KOLs more like an expert talking to a group of people. […] As KOL costs rise and consumer’s desire for authenticity grows, brands (particularly those with lower budgets) are choosing to use private traffic and KOCs to promote their products.

I’m one of the suckers that gives Google Maps content for free [3], so I’m hoping this chinese trend gets exported too. In the US, there’s also been increased interest in authenticity, as mentioned in one of my prior posts about instagram influencers. I don’t think polished profiles and KOLs are going away, but that growth likely slows. Instead, people will start following accounts that are more ‘real’. Ad money will still go to whoever can get followers, whether a KOL or KOC. I haven’t yet seen an app that gathers the best of your peer recommendations, though FB and Yelp are trying. 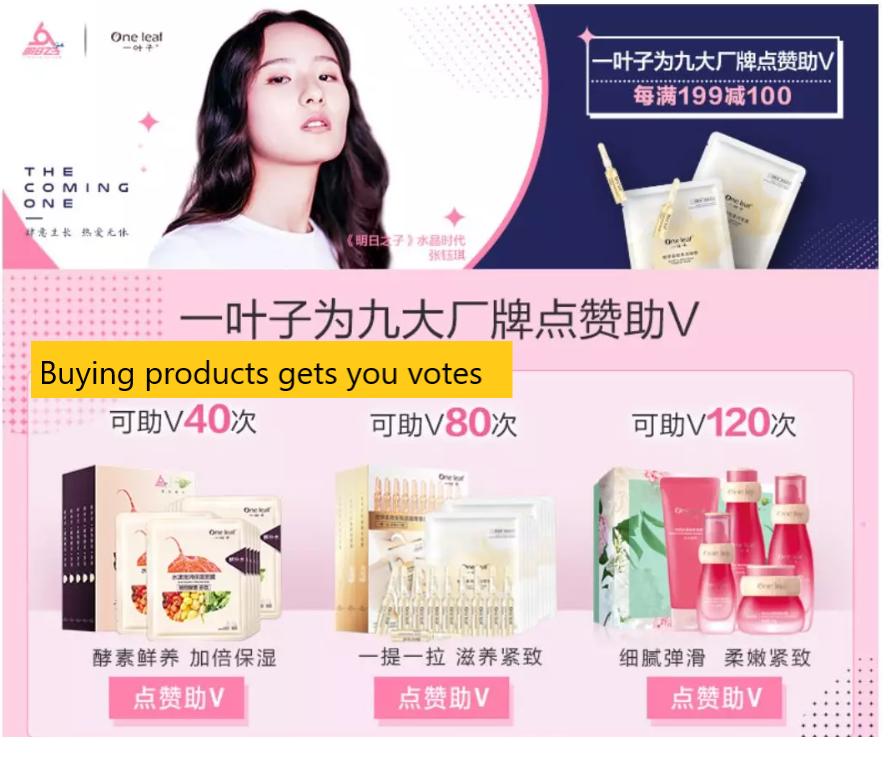 I haven’t watched reality shows in a while, but this seems like a new sales concept. I’m assuming that the purchase is done through the same app they’re streaming the show on, creating a convenient experience.

A package of DR.WU’s face masks typically sells for 20RMB […] But for Yu’s live streaming she got her followers the lowest price ever, at 6.2RMB each.

On top of that, she convinced the brand to create a new product package. […] Yu convinced them to make a new sample set containing one of each.

the brand expected Yu to sell at most 5,000 pieces, but even before the streaming started they had pre-sold 7,500 pieces. The brand had to increased its stock to 20k pieces. But at the beginning of the livestream, they were all sold out! And the brand had to do the restock again. In the end, Yu helped DR.WU sell 100k pieces of facial masks.

So one single KOL helped customers get better pricing, better selection, and moved way more product that the brand was expecting. Keep in mind this was just one of thousands of influencers in China, each having a dedicated audience that voluntarily listens to their product recommendations. It’s the new form of TV channel shopping networks, and the personalities have an even more direct relationship with their audience. I’m 80% confident that more US live streaming services will start include direct shopping features in their product within two years.

If you’re looking for world changing ideas, you’re more likely to get them from people that can tolerate the higher variance, have big visions to change the status quo, and are ok with skirting a legal and moral boundary (but hopefully not crossing it). This largely works! For all the scandals of Facebook, Amazon, Snapchat, or others, their founders are set for life. Startup success is unlikely but of such a large magnitude it whitewashes whatever you did to get there. Not quite the lesson you’d want to teach in school [4]

This applies both to individuals and companies. Momentum has always been a feature of human behaviour and hence markets. We’re all social creatures. If a person or company starts succeeding, we interpret that as social proof they must be doing something right, and raise our own opinions about them, making it even more likely for them to continue succeeding. Despite what people say about wanting to fail fast, that’s a lie, and we gravitate towards success stories.

When you make a social introduction, you put your reputation on the line. You burn some hard-earned social capital in the name of doing a favor for a friend. But when you make an introduction for a talented and ambitious friend, the calculus flips.

I actually disagree on the concept of burning social capital and think that you shouldn’t worry about that when doing introductions. Introduce me to all the interesting people you know! Avoid boring people. If the person you’re reaching out to does keep score, probably best to distance yourself from them. That said, I’m biased here since I a) like bringing people together and b) have high opinions of my friends [5]

I once read that Stripe CEO Patrick Collision ends every meeting by asking two questions: Is this the most ambitious plan you could come up with? What would you propose if you had unlimited resources?

Probably need to fact check this, but I love the anecdote! Most places try to restrict ideas, citing limited resourcing and focus. That usually kills the company over the long term since everyone with good ideas leaves, summarised in this interview of Steve Jobs.. Separately, Bezos also likes to disagree and commit in order to move ideas forward.

[Tyler Cowen has said] “At critical moments in time, you can raise the aspirations of other people significantly, especially when they are relatively young, simply by suggesting they do something better or more ambitious than what they might have in mind. It costs you relatively little to do this, but the benefit to them, and to the broader world may be enormous.”

My life trajectory was changed due to people nudging me to apply for college in the US, in just one of the many instances where a small effort from someone else significantly improved my life. This is one of the reasons I’m so focused on mentorship and would encourage all of you to be as well [6].

We suck at taking feedback, here’s how to get better

This is a lightly edited version of my monthly newsletter. Sign up here: