If you liked this, you’ll like my monthly finance and tech newsletter:

I was lucky enough to get invited by a friend to the 2019 Punch Card Conference, the annual event for Project Punch Card, “a nonprofit that supports underrepresented groups in the investment field and a long-term investment orientation”. Below are my notes from the event, with some occasional commentary of my own. As usual, none of this is investment advice.

The notes are in order of when the speaker presented:

LL - As I’ve written about before, being both contrarian and right is what makes you money, but it’s harder than people think. I agree that it’s a myth corporate governance is superior in the US; it’s bad on average everywhere. 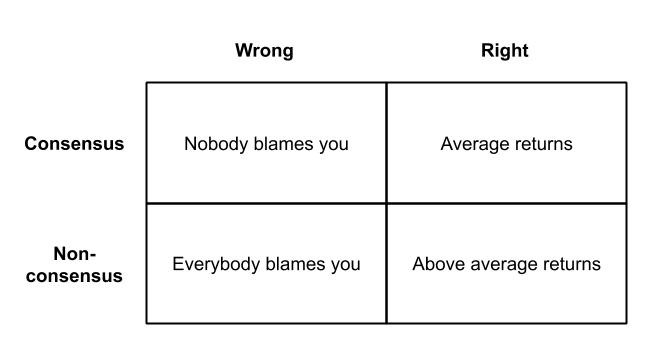 LL - I wasn’t aware of the sponsor vs mentor distinction before, but it makes sense. It seems the main difference in sponsors vs mentors is sponsors can advocate for you and get you promoted.

It’s interesting how people with more experience like Eileen will be more self-aware, realising that you don’t need to know everything and that luck plays a big role in success. I also like how she was concious of getting participation from introverts/non-social people, and that ties in nicely with Barbara’s and Michael’s points later about cognitive diversity. If you are an introvert though, I’d still recommend speaking up. See what David Laing wrote for more detail

LL - Expert networks are widely used in the investment industry; the better known ones include GLG, Alphasights, Third Bridge. Investors will pay to get in contact with subject matter experts who have experience in the industry or company they’re interested in. For example, if you’re interested in Booking.com, you might want to get on the phone with the former COO.

In the past, you could get alpha from these networks, since fewer people were using them. Now however, nearly every firm uses expert networks. Since it’s your relative, not absolute edge that contributes to alpha, expert networks have become more table stakes rather than alpha generating

On dividends, Meb Faber has written extensively about them.

On management vs moat, it makes sense that management matters, but it’s hard to determine in advance whether a management team is good or not. I’ve found that most people end up rationalising this after the fact rather than before.

LL - I like the idea of evaluating people on participation, though I wonder if I’d like it if I actually had to live through it. I understood the need for it in college classes but it always struck me as contrived, with people gaming the system by speaking up even though they had nothing of substance to say.

LL - I liked Barbara’s talk a lot, though I disagreed on some points. I’m unsure if corporate debt ratings mean much since ratings are all a game anyway; I speak from experience having put together ratings presentation decks for companies requesting ratings from the credit rating agencies. I’m also unsure if shorting for alpha works as a strategy vs shorting so that you can be more aggressive on your longs, as Chanos and others have mentioned

Besides the idea pitches, what I found most interesting was the idea of an investment platform to serve multiple fund managers at sub-scale. If I’m interpreting her correctly, it would be like a mini-Citadel / Millenium / DE Shaw etc. The platform would provide common pooled resources such as data, administrative help, network, and the fund managers would have more free time to do investment research rather than spend time marketing. It seems like it could work, though my friend brought up two issues:

1) What would be what happens when the fund managers do well? If you grow from a $200mm pod to $1bn, the LPs that are interested in you would likely change as well. Would you expect them to stick with the platform?

2) Wouldn’t fund managers be concerned about confidentiality, particularly around their returns? If you have one finance team handling investor relations, the fund manager loses control over how and what they report. Perhaps that’s better for transparency, but how many managers would be willing to do so?

LL - AQR and Cliff have published an abundance of research on their site. Cliff has discussed these points before, and what I found most interesting were:

1) How he’s come to believe there’s more similarity between AQR and comps that he’d thought. If such a respected fund is saying this, you have to wonder what the relative edge between investors is, and how you can get it. Particularly for the individual investor, since you’re not going to have access to the same information or analysis. Perhaps the edge is timing, as John Huber writes about

2) The importance of sticking with your strategy. The key problem here of course is how to separate stubborness from discipline, as Matt Levine writes about. How do you know when the world has indeed changed, and your old investment process is outdated?

LL - If the succcessful investors of the future are going to be the ones doing machine learning, that implies we’d see either huge firms or small firms survied. The medium sized firms that are a few billion in AUM would be in the tough zone of having too much capital to earn high returns but also too little to have data for alpha. Investing is still currently a human phenomenon though, and I wonder if that will change

LL - I’m less sure about the follow your passion advice since many people don’t know what their passion is yet.

LL - There was so much good content here, as expected from Mauboussin. I’ve written about Mauboussin before. The highlights for me this time were:

1) The ideal team size is small!

2) It’s cognitive diversity, not social/racial/cultural diversity that counts. This makes sense, though I’d caveat against placing too much emphasis on social science research, since we know there’s a current replicability crisis

3) The people that have the most specialised knowledge have the most to unlearn when things change. Kinda reminds me of the hedgehog vs fox argument that Tetlock poses in superforecasting, where the more specialised experts were worse at prediction

4) There have been so many situations I’ve been in where someone more junior speaking up would have resulted in a significantly better outcome for everyone. When your bonus is dependent on you agreeing with your boss though, why rock the boat? Recall what Eileen of Bridgewater wrote above. Senior people like to say they’re open to radical feedback until they actually get some

A question I wanted to ask but didn’t have the chance to: In the teams of 3 to 6, should decision making be unanimous or based on majority vote? I asked this on twitter and got a tangentially related response that didn’t answer this directly, but gave fascinating analysis of decision making in even larger teams

If you liked this, sign up for my monthly finance and tech newsletter

We suck at taking feedback, here’s how to get better

This is a lightly edited version of my monthly newsletter. Sign up here: