Well, perhaps not all writing. If you’re writing for yourself and never intend for anyone to read it, you’re an exception [1]. But the majority of writing is intended for someone else to read and respond to. Whether that be a paper at school, email at work, or self-referential blog post on your web site, you’re yelling to get your audience’s attention, with the purpose usually to inform, entertain, or persuade [2]. When you want someone to read something you wrote, you’re forcing your ideas into their mind. You’re stealing their time, their most precious commodity. Content creation is also attention appropriation.

Not all writing shouts at you with the same intensity. That school paper which you’ve used double spacing after each fullstop, increased the font size of punctuation marks, and messed with the line spacing between lines is a weak whimper, created to fulfil some criteria and hopefully never referenced again once you’ve been graded. But good writing, great writing, comes at you with a ferocity and intensity like a storm at sea, demanding your complete focus [3]. Little of our writing is going to be good, and even less will be great, but we still write with the hope that our intended recipient glances at it. We want that theft of your time. We want to be read.

Yet we have to face the inconvenient reality that most of our writing goes unread. We shout into the abyss, but the abyss doesn’t shout back [4]. It’s deathly quiet. Take Howard Marks’s experience with his now-famous memos::

Marks is known for his Chairman’s Memos that he has been his creative outlet since 1990. He describes the first decade of printing them — literally on paper, inserting them into stamped envelopes and physically mailing them off into the world — where he received precisely zero response. “We didn’t even know if anyone got them.”

How then, do we handle this sad situation? Marks explains how he dealt with this:

The answer I think is that I was writing for myself. Number one, it’s creative, I enjoy the writing process. Number two I thought that the topics were interesting and that I wanted to put them on paper. Number three, writing makes you tighten up your thinking.

and Morgan Housel follows up with his rationale for writing:

Writing is the ultimate test of whether your thoughts make sense or are merely gut feelings. Feelings about why something is the way it is don’t need to be questioned or analyzed in your head because they feel good and you don’t want to rock the boat.

Thus, we should write for ourselves first and foremost. This particularly applies in non-fiction writing, where we’re discussing an idea. Formalising our vague thoughts concretely helps us identify weak spots in our understanding. You’ll have encountered that feeling before when elaborating your idea on paper and discovering a logical gap, or when explaining something to someone else and realising you don’t understand the topic as well as you thought. Having an audience is awesome, and feedback is fantastic, but we should write without the assumption anyone will be interested in what we have to say. Writing for ourselves is its own reward, and any other benefits are positive surprises. I’m not saying to avoid publicity, but to remember that publicity is a bonus and should not be your primary driver. If it is, I fear you’ll burn out quickly.

Which brings me to the point of this post, which is to explain my reasons for starting this blog [5]. I’ve briefly described my rationale in my about section, which coincidentally is similar to the reasons discussed above [6]. For me, the act of writing is helpful to organise my thoughts, reflect on inconsistencies, and synthesise information. A few years ago, I started compiling interesting things I’d come across and emailing these to friends. Of course, I was hoping that I was adding value to them, but the main benefit to me was and still is how it forced me to record information in a succint and understandable format. Whenever someone talks about an issue I’ve written about before, my default is to send them the relevant email as a follow up [7] . As the years went by I added more people to the list, and even received thoughtful replies that improved my understanding. I comfort myself with the thought that noone has asked to drop off the list yet, though I’m wondering how much of that is a combination of (1) feeling too awkward to ask and (2) not even reading the email in the first place. Hmm…

With the email system going well, why did I decide to set up a public blog then? I was nudged initially by a friend, and became more serious about it after a change in personal circumstances. These were the pros and cons that factored into my decision:

Come to think of it [10], I should have used a decision journal framework to document this, but I guess that’s a missed opportunity. However, the above pros/cons list was enough to convince me that I should at least attempt to start a site, and see how I liked the experience. This goes back to what I’ve discussed about liking the idea of something vs liking actually doing it. After thinking through the above, it was time for me to find out, and I started looking into how to get started.

I had a few requirements. I wanted a custom domain, which ruled Medium out. If I was writing to build a brand, the first step was to have the domain name be my own. Unfortunately leonlin.com was already taken [11], but fortunately adding my chinese initials worked to get an available name on the cheap. I bought it from the appropriately named site namecheap

Ideally I wanted everything to be free, aside from paying for the domain name. This ruled out Wix, which apparently only lets you have a custom domain on the paid tier. Wix features also seemed to be more suited for building a company website rather than a blog e.g. limited formatting options, functionality etc.

I also wanted a simple site, and apparently that ruled out wordpress. Discussions online mentioned stability and update issues on wordpress that I didn’t want to have to deal with. I didn’t understand some of the commentary and features mentioned, but it seemed like wordpress was bloated and slow.

I also wanted some amount of customisation, ideally allowing me to learn a light amount of coding. This led me to Github pages, which seemed to fulfill all the criteria I had if I was willing to put in the work to learn how to set the site up. One advantage of using Github pages was that I’d be able to learn firsthand about an application that was popular among the more technical community and hopefully figure out why it was popular. Another advantage was that Github pages is a static site generator, which apparently means it’s light and quick to load. There was also a large (but confusing!) library of custom themes that would help setup but allow tweaks, and updating was supposed to be simple as well. Github also thankfully had desktop functionality and didn’t require me to install Ruby or gem files locally, though the functionality is reduced and I can’t seem to delete folders on web for some reason.

There exist a myriad of other options besides Github, but given the amount of support and my requirements, I went with Github pages. I may decide to move this eventually if I change priorities, but it seems to have functioned well so far.

I knew what I wanted to use, so it was time to set it up. Creating an account was simple, but I was quickly lost after that. It didn’t help that more detailed information on how to actually get a site running was scattered across different sites and also outdated occasionally. I’d find a helpful tutorial online by some helpful indian youtuber and then learn that gh-pages branch was no longer required and half of the steps he took were irrelevant now. I’d find five different ways to setup a custom domain, none of which seemed to fit my simple situation [12]. And people had strong opinions on whether to include the www in a domain name

One feature I thought about for a while was whether to allow comments. I decided against it, as the comment section for public posts tends to devolve into spam or irrelevancy based on my experience. For example, see the top comments from the post Zuckerberg recently made about FB’s new priorities: 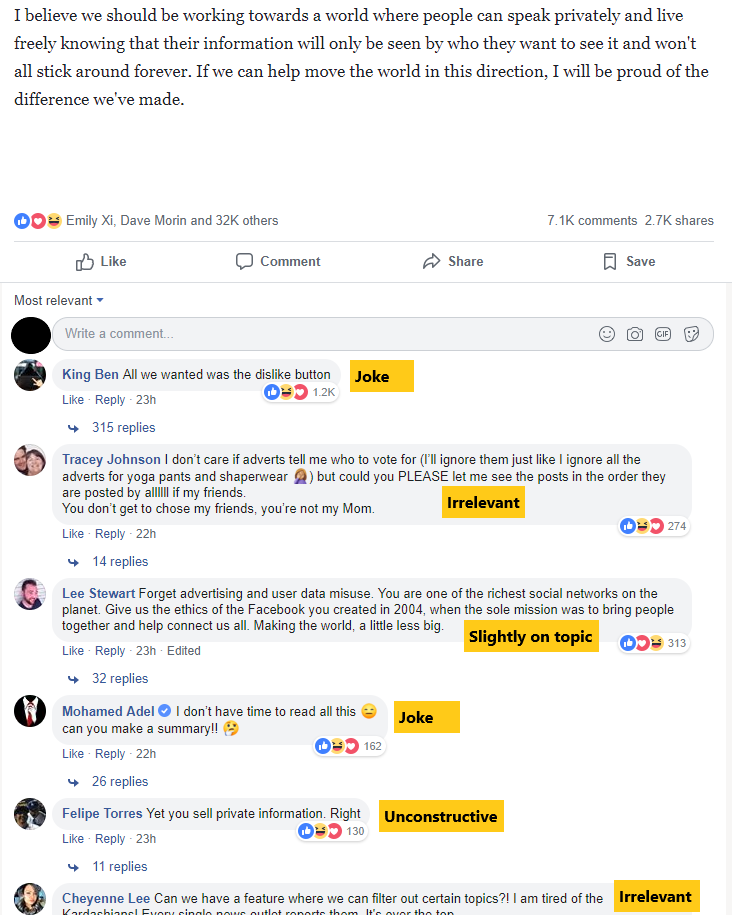 My thoughts on comments are shared by others. A separate moderated forum would be ideal, though I doubt that this blog would ever get popular enough to require that. In the meantime, people that are interested in discussing the content here can email or message me on twitter.

I spent longer than I’d rather admit on choosing the theme for the blog. I ended up going with Minimal mistakes, which was clean, customisable, and free. It took me a significant amount of time editing some of the code to get it to look like its current state, which is a combination a preference for simple layouts and me giving up on some of the features I can’t seem to fix:

Issues I still need to fix but don’t know how or haven’t looked into: 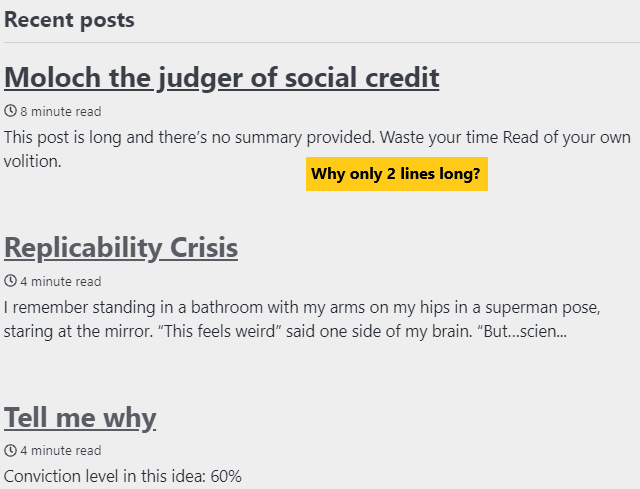 It has been highly frustrating trying to set everything up, and even something as simple as adding those images above took time. I don’t regret the decision yet, as I’ve learnt minor details about how the web works and have a product to show for my learning as well [13]. One other surprise perk is that I now have a formal system of noting down ideas and articles that I want to write about in the future since I realised keeping a list would be helpful. As Paul Graham noted, the internet might make this the golden age of the essay [14], which further supports my personal brand and individualisation thesis. I’m excited as to where this idea might go and hope to keep writing.

All that said, here are some predictions:

As you can see, I’m not placing good odds on the popularity of this site. Perhaps that’s a natural hedge, but I think that going through the process of thinking, writing, and revising my thoughts is probably the biggest likely outcome for this experiment. And that’s enough reason to do it.

At the end of the day, my writing is for me alone.

My writing is selfish.